I’ve got to admit I was a bit skeptical. I’d been to a couple of the recent working bees at Our Apple Tree and had been a little let down by the turn-out. They reminded me of an anecdote about a group who helped start community gardens. They would hold an initial meeting and if more than 20 people didn’t show up they wouldn’t bother. It’s an interesting question and one that’s really relevant to people trying to seed community actions. Do you wait until the community is formed enough to want the garden, or do you create the garden in the hope of creating the community. Now don’t get me wrong, Our Apple Tree is a great idea and has the potential to make a really lovely little garden, and Emily who was the force behind getting it off the ground has done really well, it’s just that as people’s situations change it’s easy for the power behind initiatives like this to wane.

Nevertheless, I think it’s worth keeping going so when the call was put out to ‘help’ organise a working bee I stepped forward and offered to assist. Between me and Hillary ‘help’ quickly became ‘do’ as we realised no-one else was coming to the party. This wasn’t really at the top of my priority list but I committed to the concept that if it was going to happen best try and make it big.

The call was put out, 300 odd leaflets printed and distributed, emails and favours were called and plans were hatched. As of the night before we had 2 responses on our facebook event and I wasn’t feeling fabulously excited. The weather prediction of blustery winds and rain also hampered my optimism, as did the realisation that it was completely impossible for me to transport all the stuff that I needed to take (plus 2 children) without leaving all my gear (or the children) unattended. With this in mind I forgave myself the use of the car (which became a mobile tool shed) and after some transport and child shuffling headed down to the gathering.

Pretty quickly it turned out that either I don’t get facebook (which is possible) or an online event register is not a good way to gauge interest. People started rolling up with children and tools in tow and quickly set to work. We had a couple of tasks that I wanted to achieve but it was great to see people just getting to and doing it. People who thought weeding was a priority got to that, I built a wicking bed, a mother and son team yarn-bombed a sign for us and people even braved the compost bin. I didn’t know most of the people so I’ve no real idea how the communication had spread but people were there, working and chatting so I really didn’t care.

We dug, we planted, we moved boxes and just generally cleared things up. Throughout the day two big things stood out for me. The first is that we actually nailed the timing of it. I had been wondering about how long this should go for. Between my need to put my daughter to bed and Hillary’s very astute observation that it’s a sunday morning so early is not likely to be popular, we settled on 10-1pm. This worked brilliantly as it gave us time to achieve something significant but also gave us time to sit down at the end and talk. I wanted to broach the question about sustainability of the group but actually this passed quite quickly and with some real interest. With that out that way we were left just to do one of those rare things that seems so straightforward but seems to happen so rarely. We just sat, with a group of relative strangers, bonded through a shared altruistic action of building a garden for everyone and talked about interests, experiences and aspirations. It was simply lovely. 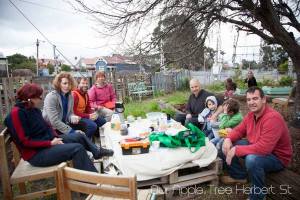 The second thing and I think the thing that surprised me was the interaction of the children. I think I counted 16 people at the peak of the gathering with at least 6 of them being little people. I guess there’s nothing that strange about this, kids tend to follow parents and I think parents have an added incentive (if you need one) to get involved in local, sustainable projects. What was amazing is how joyful the experience was for the kids. Not because of any great organisation or toys that were on offer but simply because they were given both the freedom to explore and opportunity to be authentically involved. So much so that at one point I asked if one of them would mind

moving some mulch around under the tree expecting a bit of light movement. What I got instead was some serious hard work and a dirty great hole next to the tree!

The kids planted, watered, dug and played and for three hours there wasn’t a single argument, tussle or bout of tears. They just played, learnt and engaged with the same activities that their parents were engaged with. It was a truly magnificent effort and I think this picture of Felix and Dan really sums it up for me. Whilst I’m sure Dan was going slow for Felix, there was nothing tokenistic about the

input from the kids. They were actually helping and the impact was huge. Felix spent the next week telling everyone that he had been at a working bee hammering and even got to pull out a nail. When I told Dan this he replied that he had been telling the same story to his girlfriend.

So I’m still unsure about the chicken and egg of garden and community but I am absolutely convinced that these sort of spaces and these sort of events are vital to our ability to share skills, and engage people in positive steps towards a low energy future. Equally I don’t know if it’s going to be smooth sailing for this garden but I am completely sold on the need for us to do our very best to make sure that this garden and this community continues to grow and thrive.

* Special thanks to Hillary who took the amazing photo’s, they are truly outstanding. There are more at the facebook site ‘Our Apple Tree Herbert Street’.

2 replies to Return to Our Apple Tree