Our garage is gradually falling over. I would love to believe that it’s just as a by product of it being generally old and of brick construction susceptible to the shifting of soil due to saturation and then dehydration. But the truth I suspect (at least partially) is that it’s my doing. A couple of summers ago I decided that having a concrete driveway for people who don’t really use a car, that leads into a garage that clearly doesn’t have room for a car, is really not a great use of space. This driveway also sat squarely in the zone where I should be cultivating fruit trees and with the trellising and brick walls there was just too much good growing space to let it carry on its driveway existence. So with the help of an electric jackhammer (it’s amazing what they’ll rent to any old person) me and the driveway had it out and driveway became garden bed (and a lot of rubble!)

So we’re thinking about what we would do if the garage was to fall over. Having an enormous space just lends itself to being filled with ‘stuff’ and that’s not a great use of space. I’ve always liked the idea that our garden would be far more productive if we had more time to put in to it. So at this point we are considering the possibilities of building an eco-flat at the back of our house that would provide another dwelling as well as fully utilise the garden space that we have. Obviously we would be going to all lengths to build something as environmentally conscious as we could and so we have started thinking about what we could do but also what has worked in our current house.

A couple of years ago we had the back of our house renovated. When we bought it we inherited the usual hotch-potch of self-built lean to’s, dead spaces as well as the obligatory outside toilet. All of this came with roofing that was more art than functional and an almost complete lack of insulation. We were also amused to find when the building actually started that not only was there not a single right angle in the space but one of the internal walls was completely unattached to, well pretty much anything!

cool southerly wind through the house. We changed all of the downlights to standard lighting or compact fluoro task lights. We insulated (thermally and acoustically) the hell out of every surface we could which particularly thrilled us when a rock band moved in shortly afterwards. We plumbed the second toilet, the ‘little squirt’ (see ‘everything comes back to poo‘) and, given our second child was on the way and the volume of nappies was set to dramatically increase, the washing machine into the water tank and pump. We also mounted a several frogs, a turtle and a permaculture flower into the tiling even though it probably doubled the complexity of the job since none of the tiles matched. 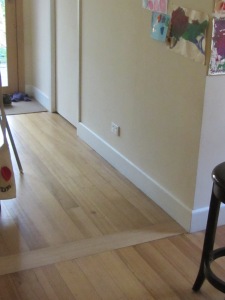 We re-used the old floorboards and filled the gaps with reclaimed boards and were quite chuffed when the man who sold us the boards explained that the workable wood amount of modern boards is about 18mm whereas our 23 mm boards would give us the capacity to strip, sand and reseal a number of times. I also have to hand it to the builder who came up with many an ingenious solution to match not only different boards but also different levels throughout the back. He also cut a section out of the panty boards to give us a cool and dry ‘cellar’ under the house.

One of the coolest things that we had never really intended to do came about after realising that the wood that was being taken out of the old internals was not only high quality hardwood and but also had spent 50 years or so drying and hardening in our walls. The builder told us that most just throw it away but that we could cut it up for firewood . This seemed a total waste of good wood. With this in mind we were rapt when we discovered an enthusiastic and ever so slightly chaotic Italian carpenter around the corner. We explained or situation, he came over took the wood that I had painstakingly de-nailed and left with about 4 measurements written on the back of an envelope and a promise that he would get back to us. No money had changed hands, we had just explained that we wanted a kitchen bench and he excitedly took it from there. A number of weeks passed and we assumed that maybe chaos had won and that would be the last we saw of Mr. U. But no, a few week more we heard from him, the bench was finished and he would bring it in, along with a couple of shelves he had made with some off cuts.

What we came out with was absolutely stunning. There is no doubt

that a lot of skill and attention to detail had re-incarnated our wood from ‘rubbish’ to furniture. It’s a great mix of subtlety such as the way the mitre of the drawers makes a pointed 90degree angle to the corner, and solidity as both I who helped move it into place and our daughter who frequently uses it as a swing can attest.

We also did some research into how to increase the efficiency of the fridge. Fridges use a bit less than 10% of the average household energy consumption but can have their efficiency greatly increased by thinking about where and how it’s used. Keeping seals in good shape, not opening the door frequently and lots of other behavioural changes can make them work better, so can good air flow behind the fridge. Nikki came up with a plan to put a shuttered vent into the floor, a vent in the wall at the top of the fridge and a alcove roof above the fridge. The theory is that cooler air comes up from underneath the house, moves across the element to cool the back and then exits outside, creating an airflow. I must admit that we never really tested how this changed our energy usage (An article in Renew mag claimed that it could increase efficiency of the fridge by 25%) but in theory it works. It also goes to show that with a little bit of forethought (and a couple of hours on the internet) we can build in many energy saving changes in to our houses that decrease our consumption without us even noticing.

I look forward to seeing what we can do from scratch should we ever have the money to replace the garage!